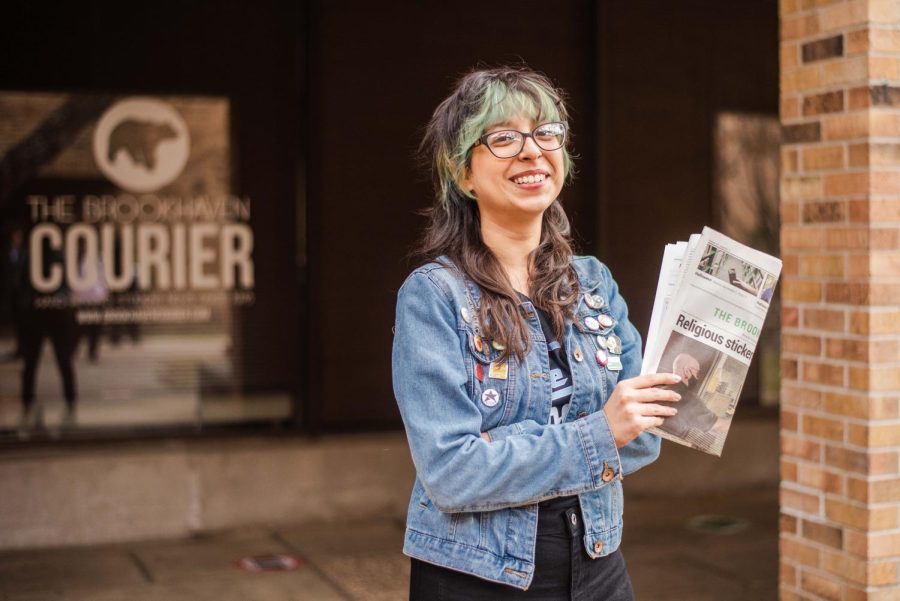 Stephanie Salas-Vega, a former editor of The Courier, in front of her old stomping grounds with most recent issue from The Courier.

At 14, when some teenagers may not be able to see beyond the weekend, Salas-Vega was looking toward her future. She would spend her free time listening to music eventually gathering a diverse musical taste which spanned from pop, funk, Latin pop to rock bands such as Radiohead, Led Zeppelin and Coldplay. With an increased passion for music and writing Salas-Vega said she knew she wanted to pursue a career in writing about music.

In middle school and high school she joined the orchestra where she played the cello. In addition to playing, she would nab a job as the program’s historian where she photographed events and fundraisers.

Her early involvement in documenting music would eventually lead her to her first writing outlet. “I had a blog,” Salas-Vega said. “I was a Tumblr girl and I had a blog where I wrote about all my favorite bands.”

After high school, Salas-Vega said she knew she wanted to pursue a higher education so she enrolled in classes at Brookhaven Campus with hopes of gaining journalism skills. Upon enrolling at Brookhaven, she discovered a path to carry out these goals when she joined The Brookhaven Courier as a contributing writer.

During her time with The Courier, she connected with Juan Betancourt. Betancourt, Courier sports editor at the time,  encouraged Salas-Vega to join The Courier as a contributing writer.

The night after the 2016 presidential election, Salas-Vega and Betancourt joined forces to cover a local protest in response to election results. That night started a professional working relationship that continues today as they pursue their journalism careers. “He understands the hardships,” she said.

Betancourt said one of Salas-Vega’s strengths is her feature writing. “It was one of the first things I noticed about her writing,” he said. “She is informed about what she writes, and she is able to create the narrative needed in feature writing.”

After joining The Courier, Salas-Vega moved on from contributing writer to managing editor. During her time at The Courier, she earned dozens of awards in almost every writing category, but she said her success was driven by perseverance and hard work.

Salas-Vega said she worked long hours helping with the many tasks associated with creating a newspaper, but she also spent extra time developing her own writing skills. In her first semester, Salas-Vega wrote 13 stories while also juggling her classwork.

“I did so much, because I wanted it so much,” she said. “I didn’t need to prove to anyone that I was good, I just wanted the experience.” Salas-Vega wrote stories and headlines, copy edited, photographed, created layouts and helped others with their stories.

Salas-Vega said she knew what she wanted to write and in order to do so she knew she needed to be good. When she struggled writing feature stories, she went back to basics to determine what she was doing wrong. “I read the feature writing chapter like 20 times,” she said. Not only did the hard work pay off in the form of awards during her time at The Courier, but she and colleague, Frances Tingle, were recently handed the reins as associate editors for Central Track.

After Brookhaven, Salas-Vega transferred to the University of North Texas to pursue a journalism degree with a focus on digital print. She continued her student newspaper experience as the managing editor at North Texas Daily. As a full-time student and managing editor for NT Daily, she never stopped writing.

Salas-Vega persisted. She freelanced. She interned at Central Track. Twice. She kept writing even when others landed jobs she wanted. And it paid off. Her new role at Central Track is the result of knowing her dream and her relentless pursuit of that dream.

After Pete Freedman, founder, editor and current president of Central Track, offered Salas-Vega the position, she immediately said yes. The position at Central Track was the culmination of her memorable time at The Courier, partnered with hours and hours of work and a knowledge of music.

Jacob Vaughn, a former editor-in-chief for The Courier, worked closely with Salas-Vega. He said: “During our last years at Brookhaven, we had each done some freelance work around Dallas. I knew she would eventually find a home as a staffer at a local publication and I can’t think of a better fit for her than Central Track.”

For Salas-Vega it is not uncommon for her to quickly identify a band’s musical influences. How does she know? Her passion drives her to explore various genres. Salas-Vega may be a die-hard The Strokes fan, but her passion for music goes beyond her favorite bands. In September, Salas-Vega wrote a feature story on Rafa, a Mexican American trap artist, for D Magazine. At the heart of Salas-Vega is a passion for music and sharing it with the world one feature story at a time.

Juggling the role of full-time student and associate editor at Central Track is a work in progress, according to Salas-Vega. However, the pride of accomplishment and family support continues to drive her to carve out a space where she can be a successful student and co-run Central Track. Those who know Salas-Vega like Betancourt are confident in her abilities. “Once she sets her eyes on something, she won’t let it go,” Betancourt said.

Salas-Vega said her advice to new writers or aspiring journalists is to never stop writing. “Take a break if you need to, but keep writing and reading,” she said.