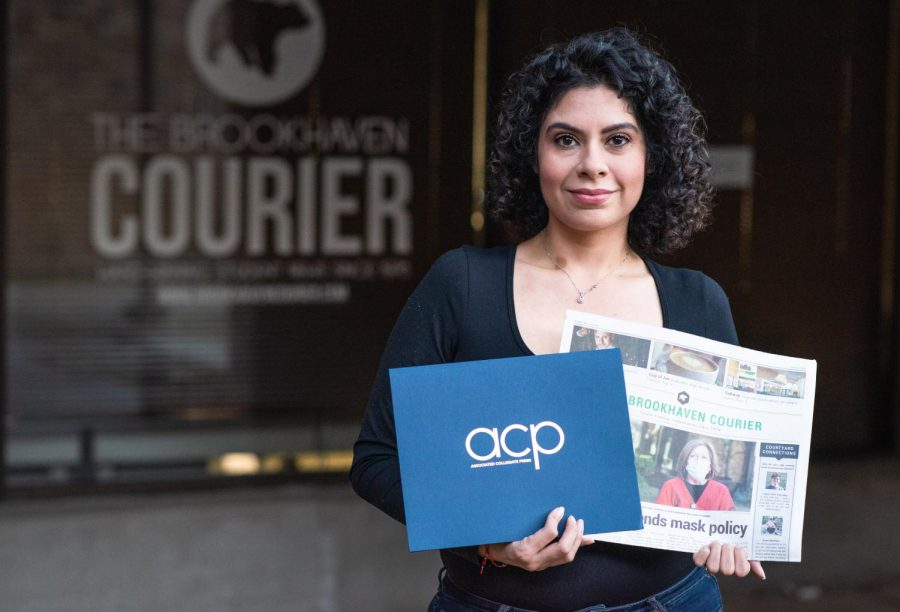 Desiree Gutierrez, former editor-in-chief of The Courier, was named a finalist for ACP’s 2021 Reporter of the Year for two-year schools.

When former Brookhaven Courier Editor-in-Chief Desiree Gutierrez received the message notifying her she was one of 10 finalists nationwide for the 2021 Associated Collegiate Press Reporter of the Year Award for two-year colleges, she was elated.

Despite finding success as a reporter and student, the journey was far from easy. Gutierrez graduated from high school as a young mother, having her son in 2007 during her senior year.

After graduating, she set her sights on college and began attending classes at The University of Texas at Dallas to study business. But after her daughter was born in 2008 she opted to leave school to work full time. She had another daughter and continued to work full time for the next decade before deciding to go back to finish her education in the 2019 term.

She initially enrolled in Dallas College Brookhaven Campus with plans to earn an associate degree and then transfer to the University of North Texas to study public relations and advertising.

After a conversation with her academic adviser, she decided to take her electives at Brookhaven where she landed in her first journalism course, taking media writing in Summer 2020.

While continuing her education, Gutierrez worked full time, completed her coursework and helped her children with their school work as they attended school remotely. Despite the stress of everything around her, she managed to push through. She said: “If I would have had a negative mindset or a negative view of things, I don’t think I would have been able to do it.”

Jubenal Aguilar, a Courier adviser, said: “She’s always focused on her tasks, even multitasking, working in her real-world job and actively participating in our staff meetings. But above all, she’s very well organized. That’s a skill that makes for a highly effective journalist and editor.”

After her first semester as a contributing writer for The Courier, she became managing editor and eventually stepped into the role as editor-in-chief during the Summer when she was able to finally step into the newsroom after carrying out her duties remotely. “She was always prepared and ready to go during staff meetings, often being the one to start the meeting,” Aguilar said. She said she realized her true passion was journalism during her time at The Courier. After transferring to the University of North Texas she decided to change her major to journalism with a minor in print and digital media and an additional minor in women and gender studies.

For Gutierrez, deciding to follow her passion in journalism was a full-circle moment as it was initially what she wanted to do after graduating high school. “I was told it just made more sense to go into business management,” she said.

Upon returning to college she was encouraged to take on public relations and advertising to secure a higher salary. “According to everybody else, I would be better off chasing the money. For me, it’s about chasing my passion,” Gutierrez said.

Gutierrez is currently freelancing and interning at the Dallas Observer while finishing her final year at UNT. She said she plans on taking additional classes at Brookhaven to round out her education in photojournalism. She also has her sights set on getting her master’s to teach aspiring journalists. “Once I’m done writing, I’m done reporting, and done in the field, I want to have the opportunity to give an opportunity to someone else.”

Rori Harrington, a Courier editorial consultant, said: “Desiree is extraordinarily hard-working, talented and driven to accomplish her goals. I continue to be impressed with her and I’m so excited to see what the future holds for her.”

Looking back, Gutierrez said one of her biggest mistakes was not following her passion for journalism after high school. She said she encourages people to pursue their dreams even though the idea might be daunting.