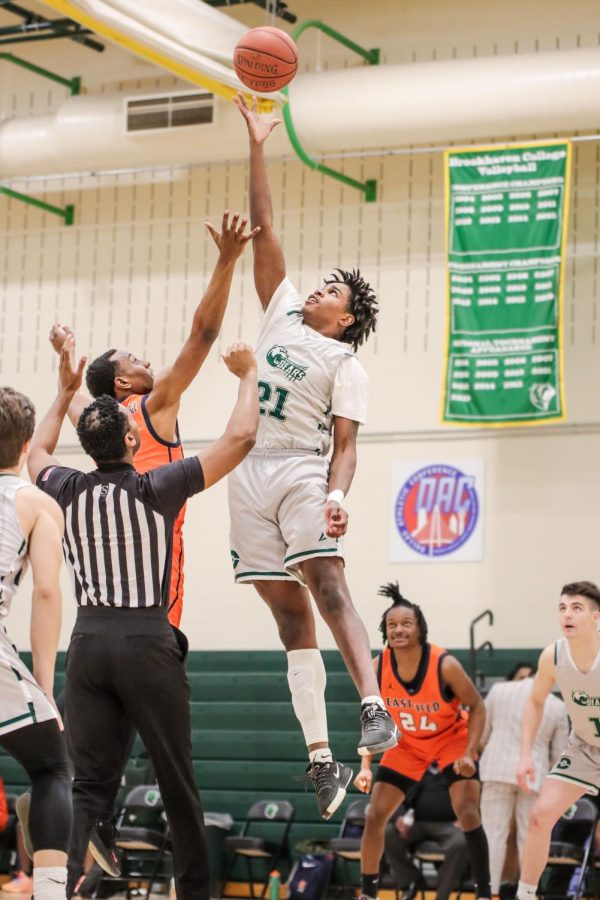 Brookhaven Bear Dannon Lundy (#21) wins the tip off against Harvesters.

As basketball season wraps up, the Brookhaven Bears continue to play with fierceness. On the evening of Feb. 9, the Bears hosted rivals, the Eastfield Harvesters. As players from both teams began to warm up, it was evident this game would be neck and neck.

Chris McGill, head basketball coach for Dallas College Brookhaven Campus, was ready for his players to take on their rival team.

“They are not only our rivals, but they’re also the No. 8 team in the country,” McGill said before tipoff. “So, I’m excited that they’re No. 8, because I’d like to knock them off the pedestal. So hopefully we can do that. As long as we execute our game plan and stay to our game plan, we should be fine.”

As the ball was tossed in the air at tipoff, the Bears’ Dannon Lundy, No. 21, reached the ball and sent it toward the rest of the starting Bears. Within the first three minutes of the game, the score was tied 6-6. The score remained tight for the first eight minutes. When the first timeout was taken, the Bears found themselves trailing 22-14. Behind by eight points, the Bears still had a chance to even the score by halftime.

Though the Bears continued to put up stiff game play, the Harvesters held a tight defensive game and finished out the first half above the Bears with a score of 45-36. After the buzz of the clock, the Bears hurried to the locker room with McGill to discuss what their game plan would be for the second half.

From the beginning of the second half, the Bears established more control and came back with a more aggressive offensive and defensive game play. The crowd and the Bears bench roared in excitement when Lundy threw down a dunk.

Throughout the second half, scoring went back and forth between teams with the Bears fighting to stay close to the lead.

With the game clock at 2:11, the score was Harvesters leading 72-68. At this point, the tension in the room could be felt as the stakes of the game rose higher as each second counted down on the clock.

With 44 seconds left on the clock, Harvesters leading 78-73, the Bears still had a chance. As time ran off the clock, the Harvesters applied aggressive defense and offense resulting in a final score of 82-76.

The Bears were not victorious. However, it was a solid performance against the No. 8  team in the country.

“Well, it didn’t go our way,” McGill said. “But if we were to have controlled the boards better, it could have been a different story. I don’t know if we would have won, but we gave up too many second chance opportunities, which lead to points or fouls, and that’s what killed us and then coming down at the end. We had it cut to four, we got the ball and we turned it over so that killed us. It took the wind out of our sails. If we will just put a game together, we are pretty good, but we got to do that.”