Texas should increase its minimum wage

The last time minimum wage was raised in Texas was in 2009. Inflation continues to rise, but minimum wage has not increased, making it harder for keeping up with expenses. 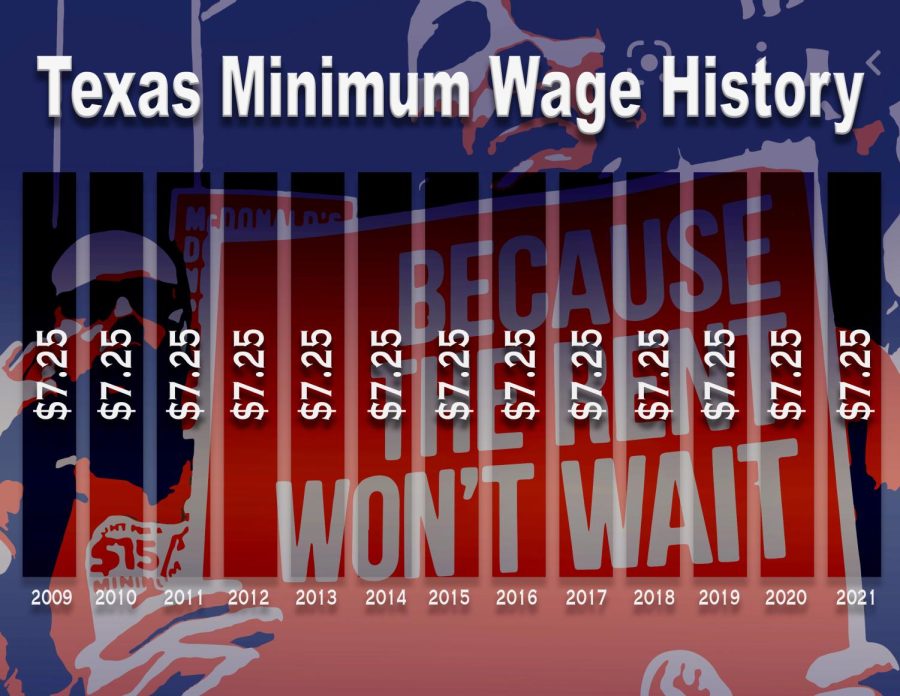 Over the last decade, Texas has seen an influx of people moving from California to the Lone Star State. More than 500,000 people relocated to Texas in 2019, according to the Texas Relocation Report 2021 published by Texas Realtors group. It seems all roads lead to Texas, and it has become a new hotspot for many.

In addition to Californians migrating to Texas, the report also found people migrating from states such as Louisiana, Oklahoma, Illinois, Georgia, New Mexico and Arizona. An increase in population leads to an increased demand on resources which often means higher cost of living. Despite these changes, minimum wage remains the same.

The minimum wage in Texas is currently $7.25, and it has not risen since 2009. There is no way someone can make a living earning only minimum wage, especially not someone with children.

Many people struggle to make ends meet. Some people work 70-80 hours a week just to get a sufficient income.

The average rent in the state of Texas is currently $1,054. In Dallas it is $1,500, according to World Population Review.

In addition to rent, people have necessities including transportation, food, utilities, personal needs and bills. These costs could add up to an extra $600-$800 a month.

Based on these numbers, the average person is spending $2,150 a month just to be able to live in Texas. If a person with no children is making $7.25 an hour, they would have to work nearly 300 hours, or 75 hours a week, in order to afford to live in Texas.

The current minimum wage makes it nearly impossible to save or invest. Many scholars and elected officials have called for the minimum wage to be increased to $15 an hour, and that is exactly the change we need in Texas.

Most adults desire to be independent and be able to make a living. To achieve this goal, minimum wage has to change.

Due to COVID-19, thousands of people were laid off from work according to the U.S. Bureau of Labor Statistics. As soon as people were able to go back to work or apply for a job, there was a reported shortage of employees. Staff shortages were visible in multiple fast food restaurants, stores and other minimum wage paying jobs because minimum wage is just not cutting it anymore.

If you want people to work, you are going to have to pay them more $7.25 an hour. In the customer service industry, workers are treated poorly and constantly have to deal with people who have zero respect for them.

People do not want to work for $7.25 an hour when the result is enduring difficult customers and possible abuse while not making ends meet.

In the restaurant industry, some establishments don’t pay minimum wage. Often pay is $2.13 an hour plus tips, although tips are not guaranteed.

An increase to $15 an hour would mean millions of Texans would receive a raise. Minimum wage needs to be increased to keep up with increasing inflation to allow people to live comfortably.