The Brookhaven Courier • May 9, 2022 • https://brookhavencourier.com/107961/campus-news/much-ado-about-bhc-spring-theater/

Much ado about BHC spring theater 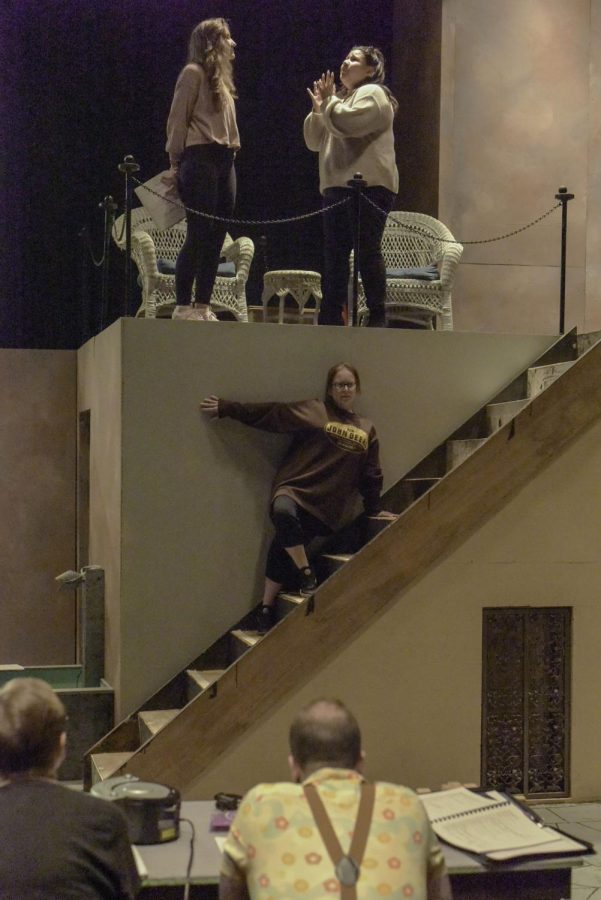 Dana Fries (below), who plays Beatrice, eavesdrops on Audrey Kleiner, who is playing Hero, and Citlali Arredondo, who plays Ursula. The characters Hero and Ursula create a plan to trick Beatrice into falling in love with Benedick in Shakespeare’s play, “Much Ado About Nothing.”

The Dallas College Brookhaven Campus theater department was in full production with a modern version of William Shakespeare’s comedy “Much Ado About Nothing.”

Originally written between 1598 and 1599 the play’s themes about gender roles, infidelity, and deception are still relevant. Shakespeare’s story is filled with human emotions and common circumstances that connect with audiences.

Darise Error, theater department head at Brookhaven Campus, said, “‘Much Ado About Nothing’ was what we were going to do as our spring show back in 2020, when we shut down.”

During the pandemic, Error  planned to run the show following COVID-19 safety protocols. She said, “Unfortunately or fortunately we could not get the OK to go ahead.” Two years later with many students returning to campus, Error said auditions went well.

“I have assembled a cast of current students and former students, as well as a couple of actors from the community who wanted to come do this show with me,” she said.

One of those actors is Dana Fries. Fries took a theater class in 2010 at Brookhaven. She said she needed a humanities credit for the nursing program. A few semesters later she dropped nursing.

Fries plays Beatrice in the play, and unlike most female leads in a Shakespeare play, Fries said, “She’s not a shrew or under the thumb of a man.”

“I personally love performing Shakespeare,” she said. The challenge, Fries said, is in the delivery of the lines and how to make the play accessible to a modern audience.

However, it also helps to have a good scene partner. Fries said she is lucky to be performing with R. Andrew Aguilar.

Aguilar is returning to theater after a three year hiatus. He plays Benedick, a charismatic yet chauvinistic man who is tricked into falling in love with his nemesis, Beatrice.

Although Aguilar starred in Brookhaven’s production of “Macbeth” in 2014 and has studied Shakespeare extensively, he said, “It still requires a lot of focus and commitment.”

At Brookhaven Campus, Error has assembled an experienced cast. She knows Shakespeare’s words can often be a barrier to comprehension, but she hopes Fries’ and Aguilar’s performances will find balance and strike the right chords with audiences.

With only four performances “Much Ado About Nothing” opened May 4 and ran through May 7. Shows started at 7:30 p.m. at the Black Box Theater in C Building at Brookhaven.