The Brookhaven Courier • May 7, 2022 • https://brookhavencourier.com/107972/campus-news/the-courier-brings-home-multiple-awards/ 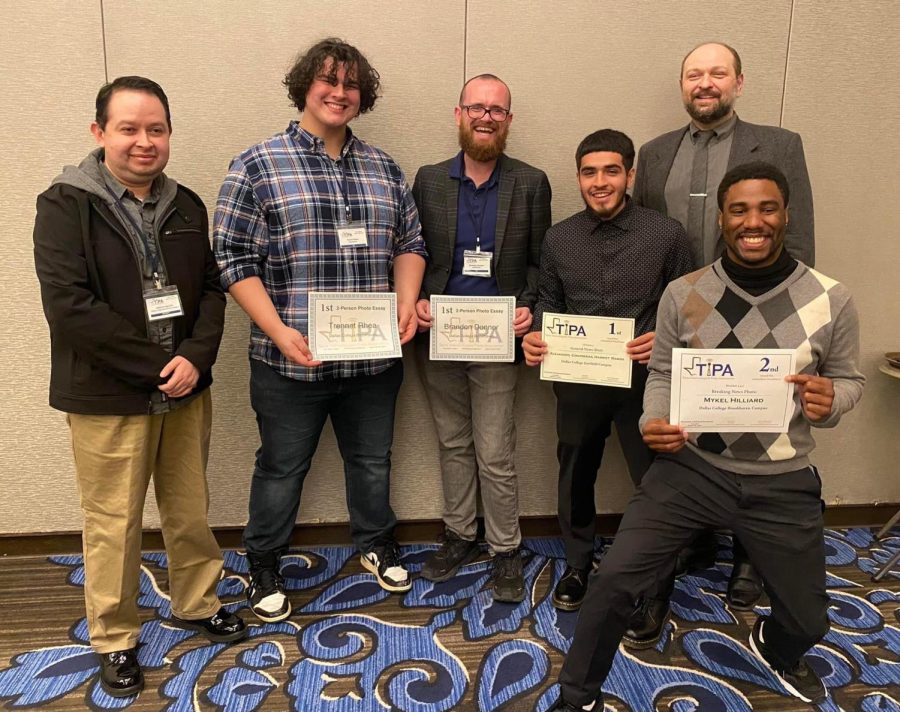 The Brookhaven Courier editors and advisers pose for a photo after the TIPA 2022 Convention March 26. During the convention, The Courier editors participated in live-competions and earned awards in various categories.

Daniel Rodrigue, student media faculty adviser, said he was thrilled with the number of awards students took home. “Few things are more affirming than recognition for hard work in such a competitive setting,” he said.

After being cancelled in 2020 and held online in 2021 due to the COVID-19 pandemic, TIPA returned to on-site competition. Students from two- and four-year schools across Texas took part in on-site competitions and attended sessions and workshops with journalists and local media professionals. They were also given the chance to network with potential employers during a career and internship fair.

“Other than catching up with the other student media advisers, the best part of being back in person for this year’s convention was definitely being able to witness the buzz and excitement of the students in attendance – many for their first journalism convention,” Rodrigue said.

“I’m particularly proud of the design award because I have learned so much from other editors,” she said. “I want to keep producing award winning content like previous editors have done.”

Brandon Donner, The Courier’s managing editor, said competing at TIPA was an honor. “I have never competed at an event like this before,” he said. “I was nervous at first, but as the day went on, I became more comfortable being there and submitting my work to be judged.”

In addition to the live-competition wins, Donner earned second place in Photojournalist of the Year for Two- and Four-Year Schools. “It felt nice to be recognized for the work that I have put in since starting at The Courier and I look forward to going and competing again next year,” Donner said.