The Brookhaven Courier • May 16, 2013 • https://brookhavencourier.com/1624/local-news/shedding-light-on-dim-bulbs/ 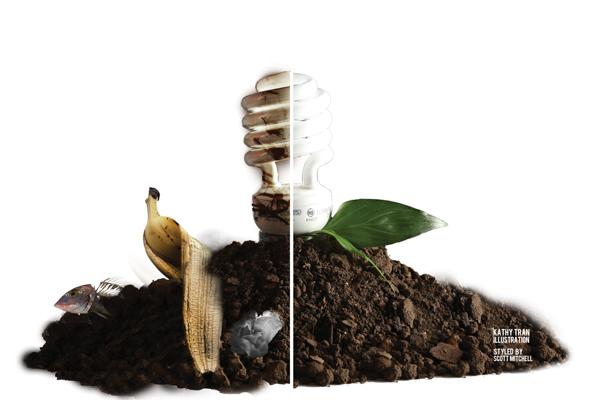 Standing in the middle of light bulb section glaring into the wattage overload could leave one riddled with confusion. The bulb aisle at the local home improvement store is not what it used to be, not to mention the questionable efficiency of the new earth-friendly bulbs.

Understanding the differences between the bulbs is critical to determine which bulb is the right one for the job.

There are three options to choose from:  incandescent lamps (the standard old-fashioned), compact fluorescent lamps (CFLs) and light-emitting diode (LEDs).

The incandescent bulbs and halogens, which work similarly, are highly inefficient. They put out unwanted heat and last around 1,500 hours, according to the Department of Energy website. Incandescent bulbs work by running electricity through a small, resistive filament, which creates heat and light.

It would seem the sensible alternative to the old incandescent bulbs would be CFL replacements. However, a few sources, such as unhighlycivilized.com and richsoil.com, said CFLs, which contain mercury, could lead to damaging environmental effects in the long run.

If a CFL bulb is dropped, the United States Environmental Protection Agency’s safety measures include having people and pets leave the room, airing out the room for five-10 minutes and shutting off the central forced air. The clean-up process is more extensive, including picking up the broken bulb with stiff paper or cardboard, sticky tape, damp paper towel or disposable wipes. The EPA recommends sealing the shards inside a glass jar with a metal lid or a seal-able plastic bag.

One major draw toward the CFLs has been the long life, which could save users money on their bills. However, Sharon Kellerhouse, lighting department manager at Lowe’s Hardware Store on Preston Road in Plano, said the lifespan might be shorter than what the label shows.

“I have had some of my customers come in and tell me that the CFLs only last a year or so, not the six to nine years that they are supposed to last,” Kellerhouse said.

According to an article on MSN.com, CFLs are often subsidized by utility companies, making them cheaper but still more expensive than incandescent light bulbs. Critics argue the discounted rate is a way for the producer and electricity companies to work side by side in an attempt to draw more customers into purchasing the bulbs – also known as “greenwashing.”

However, according to Energy Star, CFLs use 75 percent less energy than incandescent bulbs.

Kellerhouse said: “We use them in the store for most of our lamps because they do use less electricity. It does take them a few minutes for the mercury to warm up inside the bulb and then you get your full lighting.”

CFLs are backed by the EPA and the Natural Resource Defense Council. Both organizations said the amount of mercury from a CFL is insignificant and saves more than $600 million in annual energy costs.

The third option is the LED bulb. LEDs work based on the semiconductor diode. When the bulb is on, electrons are able to recombine with holes inside the bulb, and energy is released in the form of light. They are supposed to last up to an estimated 30,000 to 50,000 hours, according to the DOE, and contain no hazardous materials.

Doug Harrison, light department manager for Home Depot in Irving said: “So far all of my customers have been happy with the LEDs they have bought. But one of the problems is that the LEDs haven’t come out with all the watt sizes, which means sometimes my customers can’t get the lights that they need.”

Harrison said Home Depot has been told that all the watt sizes are in the works and will be coming out soon.

Harrison and Kellerhouse said if using either the CFLs or LEDs with a dimmer switch, the old switch has to be replaced with a different type for the bulbs to work.

T.J. Pierce of the Dallas Waste Division said all the hardware stores have collection tubs for the CFL bulbs because of the mercury in them.

“There will be a collection roundup at Richland College on April 27 in the northeast parking lot,” Pierce said. People can bring any of the mercury bulbs, any old kind of batteries, including car batteries, and the city will take them free of charge he said.

According to Homedepot. com, the cost of the three light bulbs range from the standard single incandescent bulb starting from around $3 or CFLs at around $5 to LEDs at around $10.

Kellerhouse and Harrison said the best thing to do is come to the store and ask which bulbs will work the best.