The fifth annual Don Cockrell memorial basketball game on Oct. 18 pitted the current Brookhaven College Bears against Brookhaven alumni players from past seasons. The home team Brookhaven Bears strode confidently out onto the court dressed in forest green warm ups, while the visiting alumni players wore gold uniforms as they loosened up at the far end of the court. As the alumni were introduced, they shook hands with the younger student athletes in passing, setting the tone for a friendly exhibition game honoring an important man.

Brookhaven basketball coach Kevin Hurst smiled often, despite the evening’s reminders of his late friend and colleague, Don Cockrell. “It’s a very bittersweet night for me,” Hurst said pregame as he spoke about why he organized the event in Cockrell’s name. Hurst wanted to honor Cockrell in the most appropriate way he could think of.

He created the game as a “fun moment to celebrate a great man,” he said. Hurst also organized donations to be collected for Operation Kindness in Cockrell’s name as a tribute to his favored cause.

Don Cockrell served as the athletic and equipment coordinator for more than 25 years and met his wife at Brookhaven, according to his May 2009 obituary in The Brookhaven Courier.

Joe Wilson, former Brookhaven basketball player and current assistant coach for the team, said Cockrell always had time to help others. Wilson said he’d once been limping toward his car when Cockrell, engine running and ready to leave campus, got out of his car and escorted Wilson back inside to get some ice for his injury.

Hurst said he admired Cockrell because he never put himself above anyone, and he had no reservations about helping whenever he could. Hurst said Cockrell once left his home, long after the workday was over, to return to campus and drive a bus to Grayson, Texas, to rescue a Brookhaven team stranded by a broken-down bus. He arrived in time to cheer the team on for the last portion of the game and drive them back to campus. 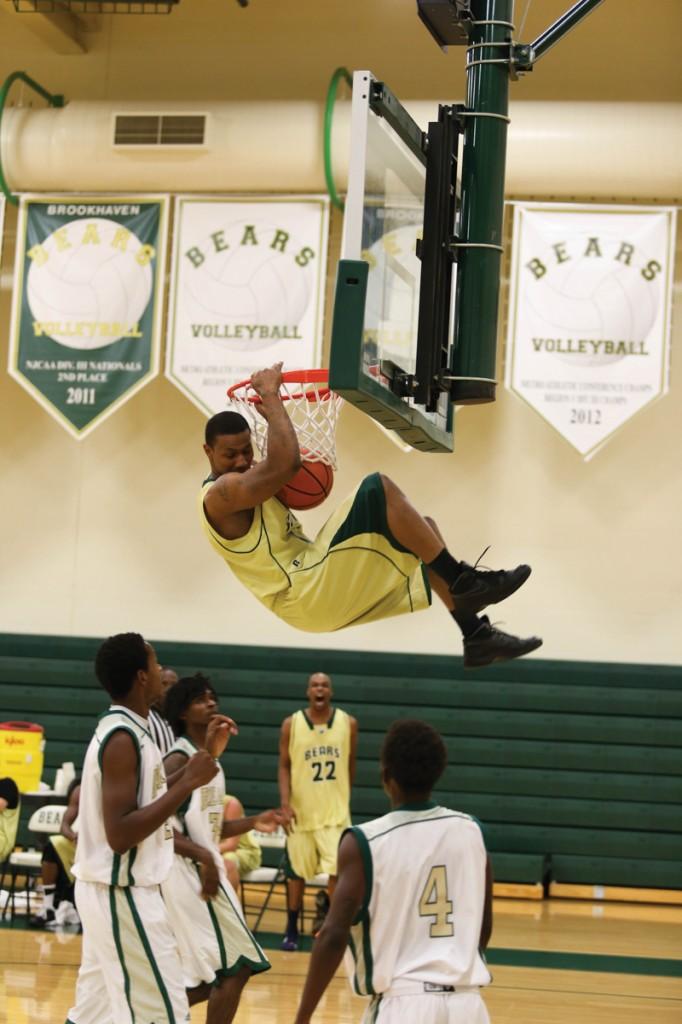 The memorial game seemed to be the ideal way to honor Cockrell. Past and present players were more concerned with having fun playing ball than scoring points in a championship bid. Current players watched in recognition as the alumni showed off their skills, learned in the same drills the current players have been taught. Alumni players noticed the changes implemented by Hurst since they were on the team. The first points of the game went to the alumni, but the younger players proved to be too much for the former players to handle. The current Bears owned everything around the net, forcing the older players to rely on distance shots, especially alumnus Chad Caudill’s three-pointers, which he seemed able to make at will.

The energy of the younger team, coupled with the players’ superior coordination, led to their domination at both the first period mark and at the game’s end. Several memorable dunks by alumnus Anthony Jackson couldn’t stop the swarm of forest green jerseys from controlling the court within reach of the net. Multiple opposing shots and rebounds were fruitless, thanks to the agility and conditioning of the home team.

By game’s end, both teams seemed ready to rest and reflect on the highlights of the night. An unidentified alumnus player said as he walked toward the car after the game, “I haven’t run like that in 10 years.” His tone and smile as he said those words spoke volumes about the man he sweated alongside.