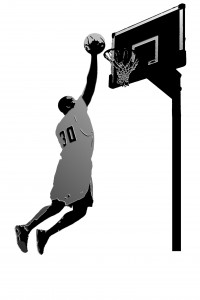 It was a cloudy, silent evening on July 3. The city was holding its breath. I broke the silence by turning the radio on. There was normally an hourly news flash of baseball scores and updates on the everlasting saga of deflate gate. The show was interrupted: “We have breaking news.” DeAndre Jordan has agreed to sign a four-year deal with the Dallas Mavericks,”Mike Bacsik, a radio talk show personality on 105.3 The Fan, said. “We got him,” Bacsik repeated over and over as the rest of the crew on air screamed and laughed .I let go a sigh of relief. The Mavericks.

The show was interrupted: “We have breaking news.” DeAndre Jordan has agreed to sign a four-year deal with the Dallas Mavericks, ”Mike Bacsik, a radio talk show personality on 105.3 The Fan, said.“ We got him,” Bacsik repeated over and over as the rest of the crew on air screamed and laughed .I let go a sigh of relief. The Mavericks had been stuck in a cycle of mediocrity since their 2011 championship run, and this was their reward for being patient.

After winning the championship, Mavericks owner Mark Cuban demolished his own team and bought in on the idea of hunting for superstar free agents with cap room flexibility. Actually getting these top-tier free agents to sign, though, failed every year. That is until Jordan verbally agreed to join. NBA power rankings had the Mavericks as contenders for the ring once again.

Five days later, tragedy struck. Early reports confirmed Jordan was having second thoughts. Throughout the day, I was glued to Twitter. It seemed unreal. I was waiting for someone to say it was all a joke, but it wasn’t.

Jordan renewed his contract with the Los Angeles Clippers, backing out of his verbal agreement to join the Mavericks.

“There will be a time when I detail everything I know regarding the last 48 hours,” Cuban said in a blast through his social media app Cyber Dust. “I don’t think the time is right to say anything beyond the facts.”

Jordan did the most disgusting thing he could do in an even more disgusting way, by unveiling his decision to remain a Clipper on Twitter. At that point, Cuban continued to say he had not even heard from Jordan.

The Mavericks treated Jordan with nothing but respect and professionalism, and he didn’t even call to confirm he had changed his mind. Instead, Jordan ignored his phone, his agent and most of all, Cuban.

Jordan made the right decision for this season but not for his career. The Clippers are better off with Jordan than the Mavericks would have been with him.

If Jordan had joined the Mavericks ,they would have made a deep play off run this season and would have had a chance to be next season’s best team .

Along with a core of Wesley Matthews, Chandler Parsons and Dirk Nowitzki, the addition of Jordan could have meant the greatest basketball team since Dwyane Wade invited LeBron James to play with him and Chris Bosh for the Miami Heat in South Beach, Fla.

Jordan was a perfect fit for the Mavericks athletically but not mentally .He would have disliked the intensity and focus head coach Richard Carlisle demands. That is why Jordan can’t fix his free throw shooting problem. He doesn’t want to.

New shooting guard Matthews kept his word on signing with Dallas. “I came to Dallas with one intention, and that’s to win,”Matthews said in an interview with Earl K. Sneed. “With DeAndreor without DeAndre, I know that this organization is a championship organization. I want a ring. I want jewelry. I want hardware. I feel we can do that here.” Those are the type of players the Mavericks need.

The José Juan Bareas who ignite passion in every game, the Devin Harrises who sacrifice their bodies for an extra basketball possession, and of course, the Dirk Nowitzkis,the humble superstars willing to give everything to the city of Dallas to make their team better.

Now the Mavericks will build another contender. General Manager Donn Charles Nelson made a trade to bring in center Zaza Pachulia. Dallas native and three time All-Star Deron Williams was bought out of his contract with the Brooklyn Nets and signed by the Mavericks in an attempt to resurrect this career. Rookie Justin Anderson was impressive in the summer league, and Parsons proclaimed Dallas his city in an interview with ESPN’s Tim MacMahon.

These additions won’t bring in the praise signing Jordan would have, but they are just as important. They bring hope and assurance that the Mavs will once again contend to hold the trophy by season’s end.

The Mavs making it to the championship may seem unrealistic to some fans, but for true Mavs fans, this is the start of a new year filled with endless possibilities.

The Mavericks start the season off against the Phoenix Suns on Wednesday, October 28.