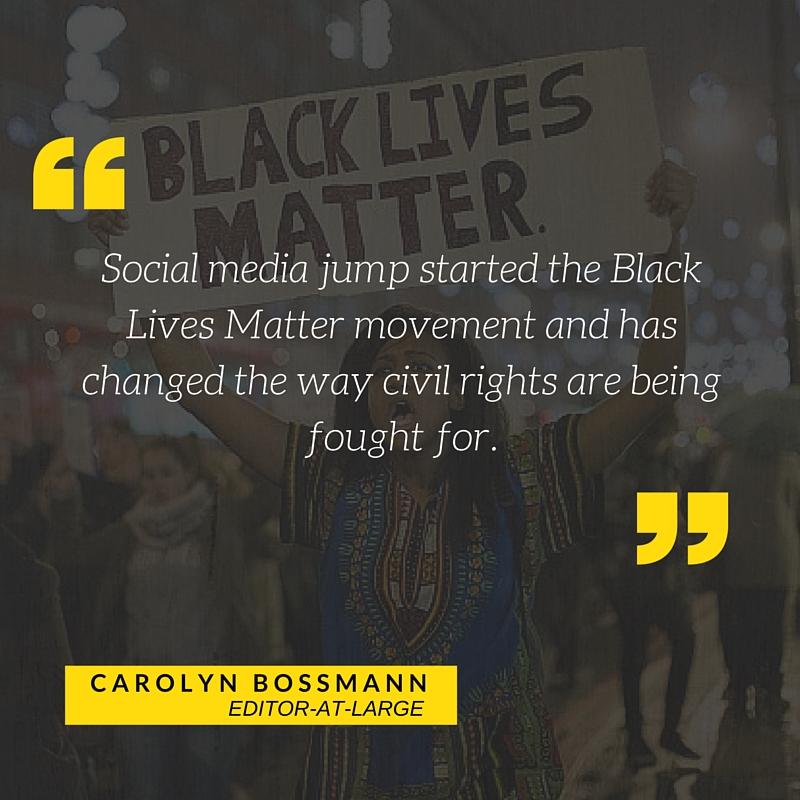 Millennials are known for always having their heads down, staring at their phones. They hashtag, snap, post, click and share their way through every type of social media they can get their hands on. While these actions have sometimes been viewed negatively, they are actually creating a platform for media to be shared freely worldwide.

These habits have created new ways for content to reach all types of consumer demographics and have given social media users the power to change perspectives, cultivate their own online voices and start movements.
After the Jan. 7, 2015 attack on the Paris-based satirical magazine Charlie Hebdo, #JeSuisCharlie trended across social media platforms.

“Thousands of Twitter users posted the hashtag in support of those killed and freedom of the press,” according to huffingtonpost.com.
After the attack, the hashtag gained so much traction, even the questionable hacker group Anonymous announced they would target terrorist websites in revenge.

In late 2014, more than 17 million videos were posted on Facebook showing people participating in the Amyotrophic Lateral Sclerosis Ice Bucket Challenge, according to forbes.com.

The campaign was simple: After being tagged in a video to take the challenge, one would either dump a bucket of ice water on themselves in a video or, if they did not want to do that, donate money to ALS research on the ALSA website.
They would then tag their friends in their video and nominate them to take the challenge, as well. The cycle would continue in that pattern.
The videos amassed more than 10 billion views and raised more than $220 million in donations for research of ALS, commonly known as Lou Gehrig’s Disease.

Not only does social media affect personal lives, but it is constantly creating outlets for new movements that last, even in those second-by-second updating mediums.

Social media jump started the Black Lives Matter movement and has changed the way civil rights are being fought for.

“The thing about [Martin Luther] King [Jr]. or Ella Baker is that they could not just wake up and sit at the breakfast table and talk to a million people,” DeRay Mckesson, an activist in the movement, said to wired.com.

“The tools that we have to organize and resist are fundamentally different than anything that’s existed before in black struggle,” Mckesson said.
Success stories are great, but there are as many, or more, failures in the social media world as well.

In 2013, Justine Sacco, a communications director for IAC/InterActive Corp, was traveling to Africa. Right before she boarded her plane, she sent out a personal tweet reading: “Going to Africa. Hope I don’t get AIDS. Just kidding. I’m white!”

As a public relations professional and the communications director for an Internet giant that owns websites such as match.com, dictionary.com and Vimeo, she should have known better. By the time her plane landed, her reputation had been destroyed, and she was fired almost immediately, according to nytimes.com.

Now, social media is taking center stage in the 2016 presidential race and has turned into a necessity for current and future presidential candidates.
The candidates have been turning to social media to campaign more and more each election. President Barack Obama popularized this trend in 2012 by incorporating Reddit into his community outreach by participating in an Ask Me Anything.

Social media gives users the ability to share, investigate, motivate, inspire and experience new things throughout the world. The power social media has is dependent on the user whenever they get on a social media platform.

More lies behind every post than just a simple click of the “share” button.
A single tweet ruined a communications director’s life. A shared video revealed police brutality rooted in racism. A simple hashtag defied an act of terrorism and united people worldwide.

A flippant remark on social media could be completely innocent, but sharing with the public gives the user power – whether that would be bad or good.