“As long as I am here we will keep working,” Jim Elder, Brookhaven head soccer coach, said. “We want Brookhaven to be known as having the best NJCAA women’s soccer program in the U.S.”

During the first half, the Bears challenged the Generals’ defense with 12 shots on target, according to njcaa.org.

“Once we lose the ball, we get it back as fast as possible,” Elder said in an email to The Courier. “Everyone has a role in defending, everyone, even our top goal scorers.”

In the 17th minute, Bears Joseline Sorto smoothly ran through the Generals’ defense. She found an open space for a shot, but the Generals goalkeeper Rachel Todd secured Sorto’s shot.

In the 22nd minute, Pond was fouled by Generals Hailey Couchman. The referee signaled an advantage play. The play allowed Bears Deshae Darrell to take a longrange power shot on target with open space. Todd dove toward the ball, but did not block the shot. The Bears were up 1-0.

In the 52nd minute, Bears Savanna Hernandez passed the ball to Sorto, but it went out of bounds for a goal kick.

In the 60th minute, the Bears’ midfielders lost control of a corner kick. The Generals recovered the ball for a fast break, but the Bears’ defenders were not going to give up a goal and cleared the ball away from danger.

“I had to take a deep breath,” Elder said. “I saw all that we had worked [for] was slipping away.” The Bears were headed to overtime, where the winner was to be decided by a golden goal – the first team to score would win the match.

If neither team scored in overtime, then the winner would be decided by penalty kicks. This was not the first time the Bears went into overtime this season. In 2017, Brookhaven had a 2-1-1 overtime record.

“We circled up. It got very quiet in [the] huddle and [we] looked at each and every player and coach,” Elder said. “I reminded them that we deserved to win this game. I reminded them of the hours and hours of work and sacrifice we had invested since Aug. 1.”

Though Brookhaven battled Herkimer in extra minutes, the Bears immediately attacked the Generals.

In the 91st minute, Bears Corrina Ortiz crossed the ball to Bears Savanna Hernandez, who was marked by two defenders. Hernandez headed the ball inside the penalty box to Bears Jazmine Bustos. Bustos outran her marker and took a low volley shot on target. Todd dove, but the ball bounced from the turf field into the net. The Bears were crowned national champions with a final score of 2-1.

The Bears finished the season with an overall record of 14-3-1 and were the top ranked team in the nation. 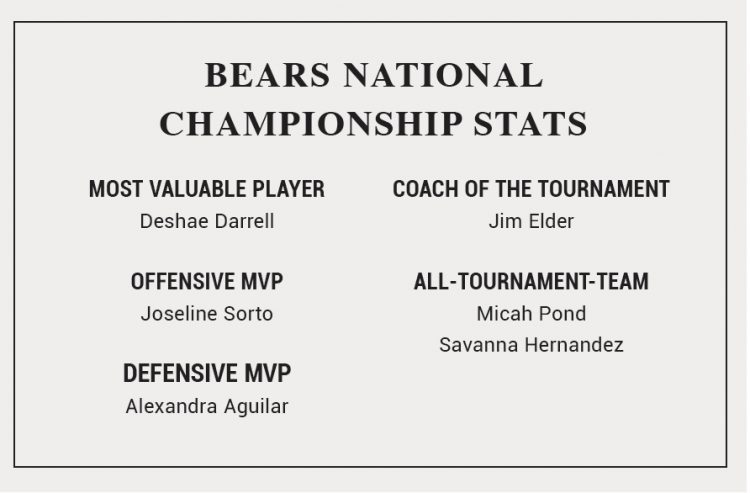