Taste of the Fair 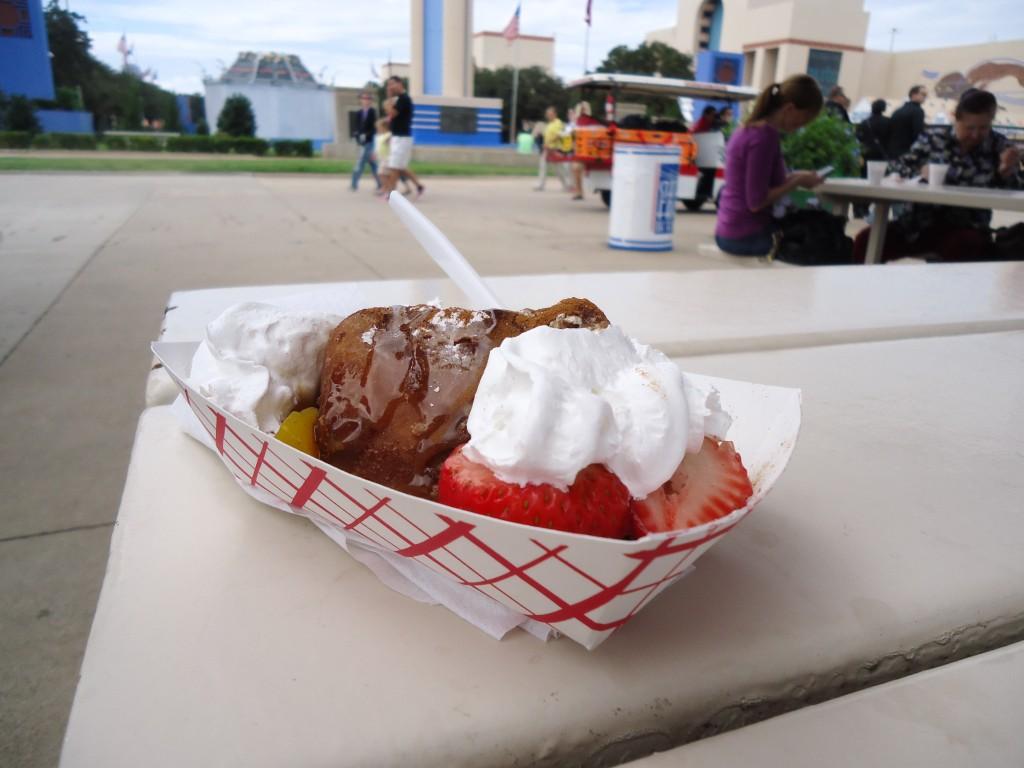 Anyone standing downwind from Fair Park can smell the fried food in the air which only means the State Fair of Texas has arrived.
Known as the Fried Food Capital of Texas, the State Fair of Texas has exciting new inductees this year. Created in 2005, The Big Tex Choice Awards allows vendors to compete to win one of two awards for “Best Taste” and “Most Creative.”
As an avid fairgoer, I make it a point to try the winners and anything else that is fried and unheard of, and with that unique ambition each year comes a new love. As a tradition I attend the fair opening day with Maalox and Tums in hand and I set out to conquer the fried food.
Even though the contestants tend to gear towards inventing fried creations the contest does not have any particular rule that the food submitted has to be fried.  Numerous entries are made as concessionaires hope to win the acclaimed titles. In the past the winners have been fried peanut butter jelly and banana sandwich, which has now become a staple of mine, fried banana split, chicken fried bacon, fried Coke and fried bubblegum, which is as gross as it sounds. This year the winners were Deep Fried Jambalya and Fried Bacon Cinnamon Roll.
Though you do not get much bang for your buck the small ball of Jambalya is phenomenally outstanding. With a slight spicy kick and the warmth and texture of the rice, there is no question of this being the 2012’s Best Taste winner. But then I was introduced to heaven, the Fried Bacon Cinnamon roll, which won “Most Creative.” With each bite you get a crisp outer shell with the moist cinnamon roll inside and that grand taste of bacon. Another favorite of mine this year from the new list of finalists is the Fried Tres Leches Cake. The cinnamon blended in with the melting creamy whipped cream, on top of the cake with a sliced fresh strawberry brings back memories of when I was a child. It is a reminder of my Grandmother’s tres leeches cake, although her version was definitely not fried.
Most people attend the State Fair simply to taste the exotic winners but what about the non-finalist? There have been several creations that were not entered in the contest or did not make it past the semi-finalist. By any means, it is not to say they are not note worthy, even if they are items typically sold for the one season they were created. You can also find past winners like the Fried Banana Pudding or Chicken Fried Bacon.