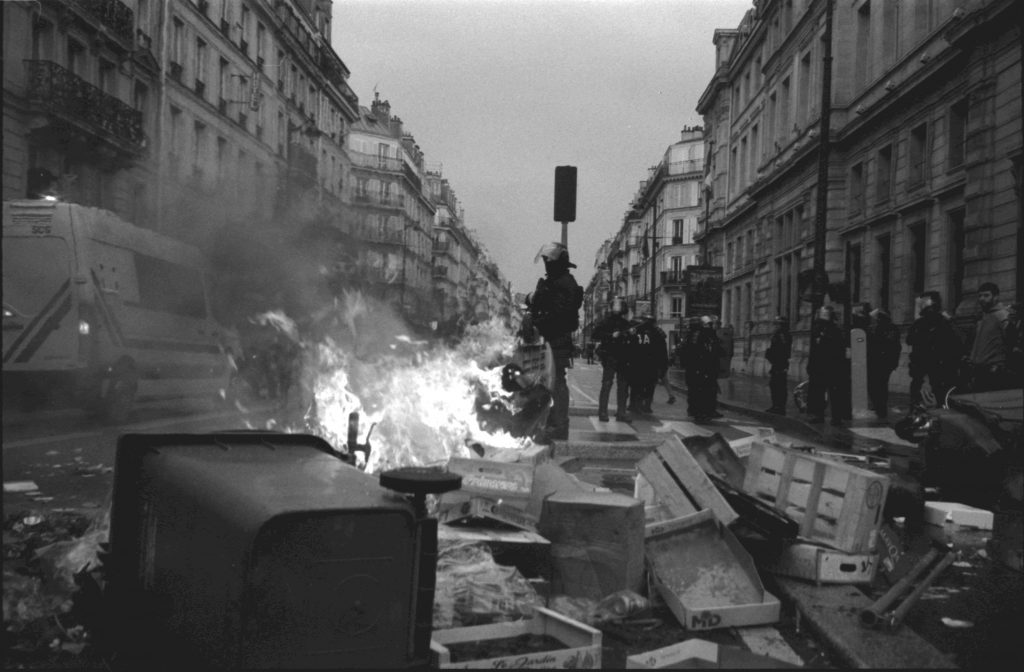 Film photo courtesy of Lev Bourliot | French police stand by burning trash in a market street after chasing away protesters.

A group of French rioters roamed the streets of Paris looting and setting trash cans on fire to show their opposition to France’s gas tax and other economic issues one Saturday in December 2018. The rioters were on their way to face police, who were armed with helmets, gas masks and shields.

Following them was Lev Bourliot, a Brookhaven College multimedia artist and photography student, with his Canon AE-1 35mm film camera and an Olympus point-and-shoot.

From afar, a long line of police officers charged toward the rioters at full speed. Before he could think, Bourliot jumped out of the way and flashed his Brookhaven Courier press pass to let them know he was not just a bystander. Dodging the protesters’ Coca-Cola bottles and the police’s tear gas grenades, Bourliot maneuvered through the chaos before he was eventually tear-gassed.

“I wasn’t scared for my safety the whole time I was there. I was scared I was going to be in the wrong place at the wrong time,” Bourliot said. “But being in all that, I felt alive. I felt too much adrenaline. It’s kind of hard to focus on taking photos. I often take photos without looking.”

Violent protests involving members of a movement known as the “gilets jaunes,” or Yellow Vests, broke out in France mid-November and have been held every Saturday since, according to The New York Times. Protesters angry over high gas prices in rural areas where people depend on cars due to the lack of public transportation rallied against the government of French President Emmanuel Macron.

“[Protesters] get tired of walking, and then there’s one who just won’t shut up, so those guys rise out of the crowd and are the ones who want to break stuff,” Bourliot said. “Those are the people I wanted to follow.”

The black-and-white images Bourliot captured during his Paris visit are showcased in The Basement Gallery on the lower level of L Building. The exhibition opened Feb. 4 and runs through the beginning of April.

The exhibition, titled “Chasing Light,” also includes photos taken in Mexico City and Dallas, as well as art pieces made from manipulated photographs. Bourliot spray-painted one photo over stencils.

“As soon as I found out how to use film, I wanted to take as many photos as I could so I could get the right ones in my portfolio,” Bourliot said. “I was just kind of chasing light rather than waiting for it to come to me and have the right moment. I try to be at the right moment.”

The photos in Bourliot’s exhibition were taken over a span of six months while visiting family in Paris, where his parents recently moved, and Mexico City. Bourliot said some images were shot with Film Washi, a handcrafted film from France. All photos were developed in the darkroom in L Building.

One image is a shot of Paris taken from the Eiffel Tower. The photo resembles a 3D satellite map, with traceable streets and buildings popping out.

Another photo was taken from under the tower looking up. In another, protesters are seen urinating in the bushes by the Louvre museum with a view of the Roue de Paris, a 200-foot tall transportable Ferris wheel.

“The media updates everybody on where the protest is going,” Bourliot said. “They told them it’s going to be at the Louvre but that was a decoy and they all met up in Paris.”

An overturned trash can, a small fire pit, scattered boxes and trash in a narrow street cover the foreground of one photo. A police officer in riot gear stands centered behind it while others stay to the right. Bourliot captured the image while following the rowdier rioters.

Bourliot said he used both of his cameras interchangeably, often taking photos without looking through the viewfinder.

Other images show Mexico City’s culture and the aftermath of the 2017 earthquake. Tangled power lines on posts and across building walls were among the damage caused by the earthquake, Bourliot said. A close-up of small figurines hanging by a string was taken inside a city shop whose owner charged tourists 15 Mexican pesos (less than a dollar) for photos.

“He brings a creative experimentation to his photography that, to me, is very inspiring,” James Rizzi, artistically known as JM Rizzi, said. “He’s never afraid to explore various angles of mediums. I find him to be quite courageous with his image making.”

On Feb. 7, Bourliot added a photo of Rizzi to the exhibition – he has been shooting a documentary about Rizzi since summer 2018.

Bourliot is no stranger to the art world. He’s a photographer, filmmaker and painter. When he is not hanging out in the darkroom, he is  in D Building working on his next canvas.

The contemporary artist traces his roots back almost seven years to when he filmed YouTube videos with friends. Since then, he has filmed short documentaries and music videos, which helped him transition to photography.

Bourliot said he could not have taken the photos in his exhibition if he had not learned composition from filmmaking.