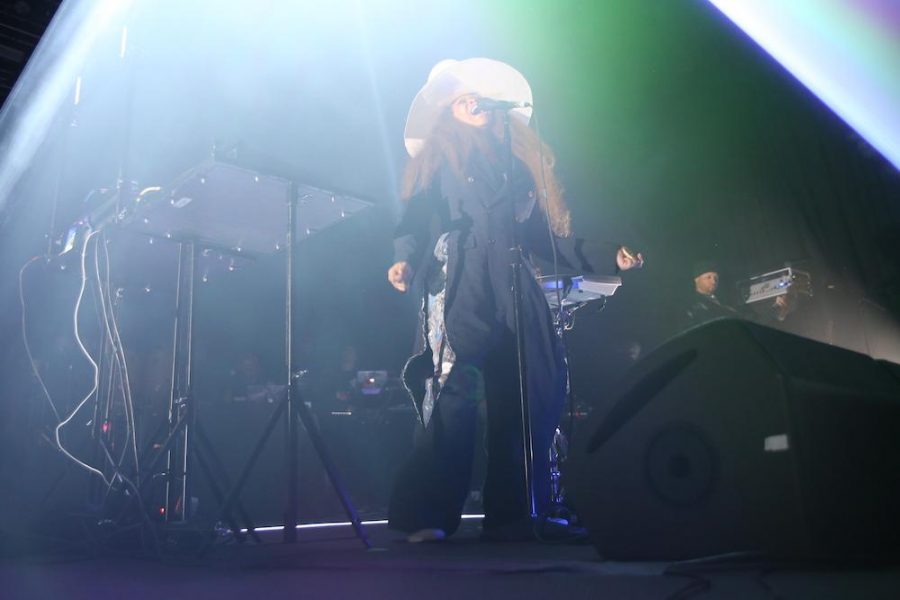 Queen of Neo-Soul Erykah Badu gives a passionate performance during her latest birthday bash at The Bomb Factory, Feb. 23.

R&B singer Erykah Badu celebrated her 48th birthday with friends, family and over 4,000 fans at The Bomb Factory. The annual Deep Ellum celebration has become a tradition dating back to 2013 for the Queen of Neo-Soul.

Dave Chappelle, a comedian and longtime friend of Badu, came out from behind the curtain and introduced her onto the stage. He said Badu’s birthday party is like a church he goes to once a year.

The Queen’s set lasted over 50 minutes as she performed with a beat pad on her left, keyboard on her right and a full band with three backup singers strategically positioned behind.

She stood on a dark stage, inside a pyramid of white lights resembling the Luxor Hotel & Casino in Las Vegas at night, as she performed her first song of her set, “Hello,” from her latest album, “You Caint Use My Phone.”

Badu sang fan favorites such as “Next Lifetime,” “Appletree” and “On & On,” even treating the crowd to some unreleased music. During one song, she performed a tribal-style dance, gliding across the stage as she flowed through it with elegance and grace.

Stephanie Padilla, a fan of Badu for over 20 years, arrived at The Bomb Factory around noon – eight hours before the celebration started. She and her husband were first in line for the party.

Her face filled with excitement as she ran into The Bomb Factory to claim her spot a few feet from the stage. “I hope she will always feel the love that she gives us all, especially [people from] Dallas,” Padilla said.

Between songs, Badu shared how she has grown since her 1997 album “Baduizm.” She also talked about family, life and how she draws inspiration to create her music.

Fans of all ages, race and color stood united, packed in The Bomb Factory singing along to every song. Badu involved the crowd, giving each section words to sing back to her. She orchestrated a fully participatory performance.

As the evening came to an end, family and friends of Badu appeared on stage. Among them was Billboard Top 100 recording artist Talib Kweli. He reinvigorated the atmosphere as he grabbed the mic, and the DJ spun some of his most memorable hits.

Chappelle talked about the importance of friendship and how much the night meant to him. He sang a song a capella to Badu, standing with one foot on top of a stage speaker.

Fans and family sang along as he slurred his way through the touching lyrics. Badu sat down on the edge of the stage with her head in her hands, moved by the love she experienced in that moment.

The party continued well past 2 a.m., until The Bomb Factory staff was forced to cut the microphones.

Fans were upset, but Badu found a way to say, “Thank you” and “I love you all,” with only her hands. The tension the abrupt ending had created in the crowd was put to rest.

He said he looks forward to her 50th birthday celebration and anticipates the milestone year to bring something extravagant.