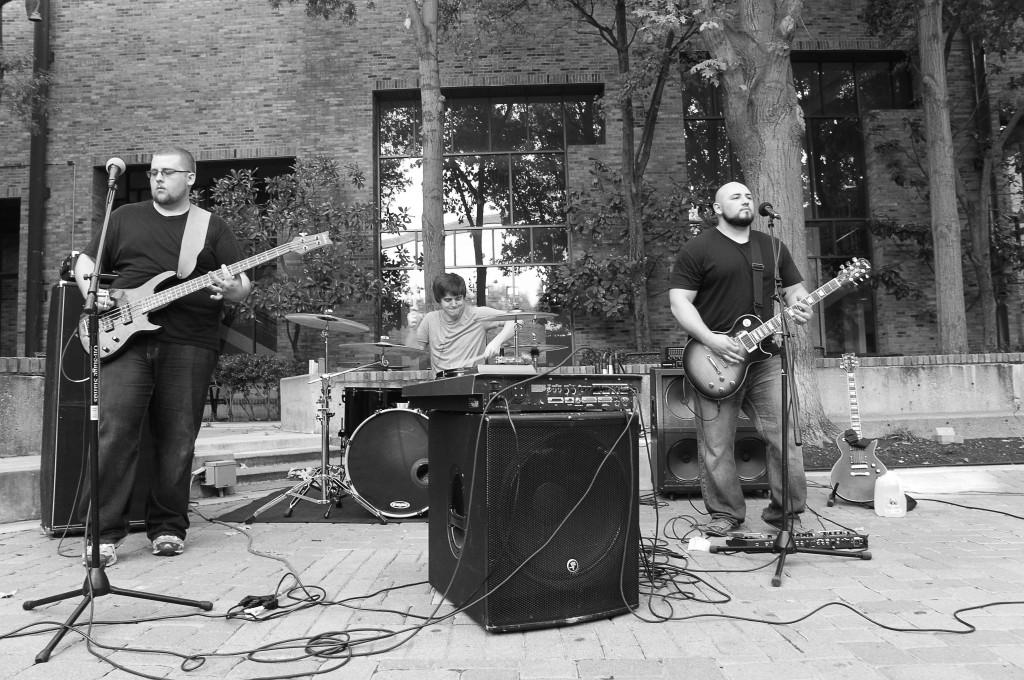 The klutzy disquiet of panic and confusion trickled beneath the customary ambience of students and faculty on their pedestrian commutes to class and otherwise Oct. 9. What went unnoticed to many silently troubled sophomore Martha Tramel, as she briefly lost control of the project she had just as hastily championed.
“Nervous, disappointed, upset —” she recalled, her eyes wandering as if the reminder of the pressures was still a bit distressing. “I was all of these things.”
Tramel referred to the mishap that surrounded her first undertaking as the leader of a little-known effort by a small group within the Office of Student Life.
“A band approached Student Life a month ago about performing on campus,” she said. “They were forwarded to me, and from there, with the approval of my supervisor, we set up the performance.”
Tramel is chair of the music committee, a branch of the OSL dedicated to bringing music culture to campus and the student body by introducing them to local acts, organizing campus-wide events and providing opportunities for students to showcase their own talents.
When the band, Laughing Season, arrived early Tuesday afternoon, Tramel led the New Mexico alternative rock group to Brookhaven College’s  Commons Courtyard.
The three-piece’s performance was, however, inadvertently set to coincide with the much-discussed SACS evaluations. Once administrators became aware of the slip, a swift response brought the show to a standstill.
Tramel and the band weren’t so easily deterred.
“[Laughing Season] then came to me and insisted they perform at a later time. I called my supervisor, asked for permission, and once it was all settled, we got the green light for the band to play at five.” Tramel said.
With a collective sigh of relief, the show went on. Laughing Season performed an hour-or-so set to curious bystanders and clusters of interested listeners, who sparsely freckled the courtyard, but, more importantly it seemed, Tramel’s vision of providing an artistic outlet for students took its first step in a shaky but positive direction.
“I love music and just enjoy helping people. That’s what I do best,” Tramel, who is also president of the campus community service organization, SERVE!, said. “When people need me, I want to always be there.”
This attitude, coupled with a passion for artistic expression that stems from being a songbird herself, Tramel said, put her in a position to create an environment that seeks to nurture and uncover the artists in students who may have no outlet otherwise.
“I want to get the student body involved and comfortable with showing their talents,” she said, glowing with enthusiasm, “as well as expose them to different kinds of music that they may not be aware of.”
Though still in its early stages, Tramel said she sees the potential in the music committee’s endeavors. She intends to host not only individual performances — in fashion similar to the Laughing Season show — but talent shows, artist workshops and a Brookhaven concert series.
“The possibilities are limitless,” she said. “Andrew (bass player of Laughing Season) said he’d heard among students, ‘We’ve never had anything like this. Why don’t we do this more often?’ That’s what I intend to do — to bring the student body together with music, culture and opportunity.”
Tramel’s other on-campus endeavor, SERVE!, will host a fashion show noon-1 p.m. Thursday, Nov. 8, in the Commons Courtyard, and will provide free food as well as accept donations to benefit Children’s Hospital.
With this, the music committee and a slew of academic and extracurricular obligations, Tramel said she intends to leave more than a footprint on Brookhaven once it’s all said and done, as she plans to transfer to the University of North Texas in pursuit of a career in elementary education.
“The lasting impression I want to leave on this campus,” Tramel said, “is that there’s something wonderful and special about everyone here, and by encouraging students to put themselves out there, I want to give them the freedom and confidence to go for it, even if just once.”