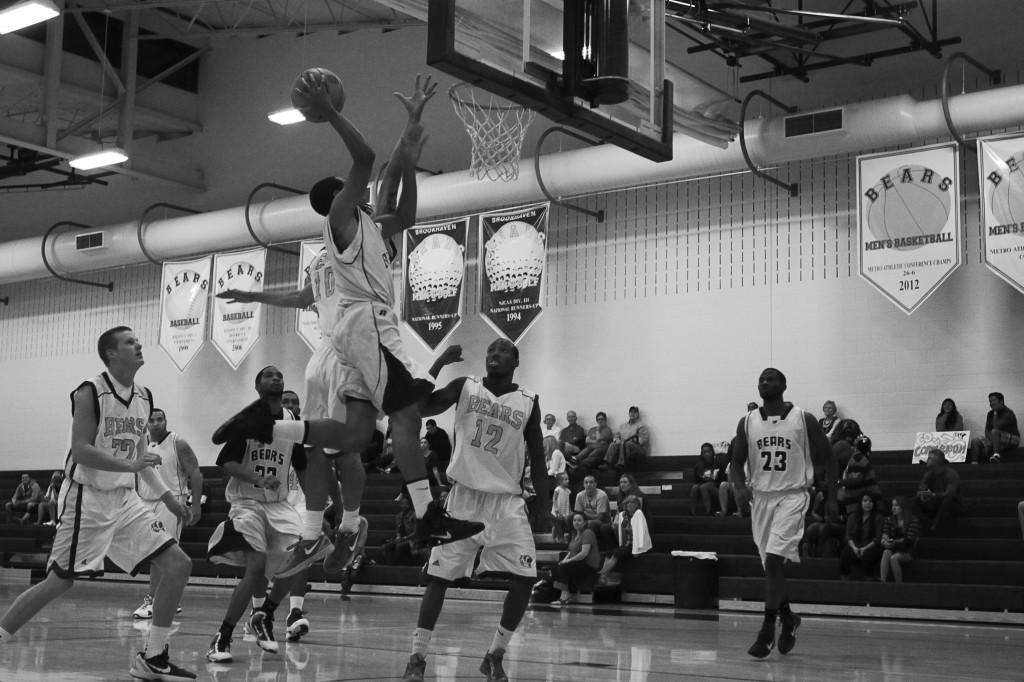 Head coach Kevin Hurst paced outside his office as he waited for the start of the fourth annual Don Cockrell Alumni Basketball Game. As the alumni players arrived Friday night, they headed to Hurst’s office to quickly catch up and received their jerseys for the game ahead. Meanwhile, in the gym, this year’s team got in a quick shoot-around before the game.
Family and friends piled into the gym awaiting the start of the game. The national anthem was played and Hurst came to the microphone with a special tribute to Don Cockrell prior to tip-off. Hurst used an analogy to describe Cockrell’s beloved personality. He said there is an ancient phrase that talks about the salt of the Earth. “It reflects the two main qualities of the freshness of salt and the preservative nature of salt. Salt back in ancient times was more valuable than a lot of precious gems, and it was the only way to preserve food because there wasn’t refrigeration,” Hurst said. “Don was both of those. Don was more precious than any precious mineral or gem and he preserved all that were around him.”
Both teams subbed players in and out consistently throughout the first half. The intensity in the faces of the participants revealed this game meant a lot to the players and coaches on both sides of the court. Toward the end of the first half, the alumni team made a comeback, and when the buzzer sounded the scoreboard showed a tied game: 36-36.
The second half began the same way the first half ended, with an electric atmosphere. The Bears started off struggling to get things going against the alumni team. With 12:55 left to go in the game, the alumni called the first time out with the scoreboard reading 51-48 in favor of the alumni. The Bears came out of the time out in good measure.
Guard Trey Baldwin hit two clutch threes and a two pointer near the free throw line. The Bears’ comeback tied up the game, but the team fell short as time began to run out.
Baldwin was the leading scorer for the Bears with 18 points. Dominique Harris, who averaged two blocks per game during his one-year tenure during the ’08-’09 season, finished the game with 20 points for the alumni.
After the game, some of the alumni players met with the current Bears basketball players to talk to them about their upcoming season. Donations were also made throughout the game toward Operation Kindness, a no-kill animal shelter that has saved nearly 70,000 animals since it was founded in 1976, according to its website.
Don Cockrell was the athletic and equipment coordinator for more than 25 years at Brookhaven College. During that time, he was more than just that. He has been described as a mentor, teacher and a father figure. He died on April 29, 2009, at the age of 52.
Cockrell was an advocate for the Humane Society of the United States and Operation Kindness. He had a major influence on thousands of student athletes as well as the staff that he knew and worked alongside during his time at Brookhaven. The Don Cockrell Alumni Basketball Game was started in his honor in 2009.
Craig Green, a former Brookhaven basketball player who holds the record of all-time leading scorer, said: “This game means a lot, just to come back to Brookhaven, because this is my first time coming back, even just to visit … Don meant a lot as well. I used to work for him in work study. It’s always good to come back and be a supporter.”
He added that it felt good to be back.
“I came to Brookhaven fresh out of high school, 18 years old, and Don was a real good guy,” former Brookhaven player Eddie Love said. “He always shot it to you straight and let you know what was going on. You could always tell that he cared a lot about all the players. When things didn’t always go our way, he would always pull us aside and have encouraging words for us.” Love said when he heard the news of Cockrell’s death he was out of state for college and was deeply hurt. He said he will miss Cockrell always.
Lynne Levesque, athletics director, said Cockrell was not just another employee, but a close, personal friend.
“When you have someone with you day in and day out for 25 years, they’re not easily forgotten or replaced,” Levesque said. “He wore so many hats, like coaches and athletic directors do. He always instinctively knew what to do around campus. He was very pro-student athlete. A lot of the kids greatly looked up to him for guidance.”