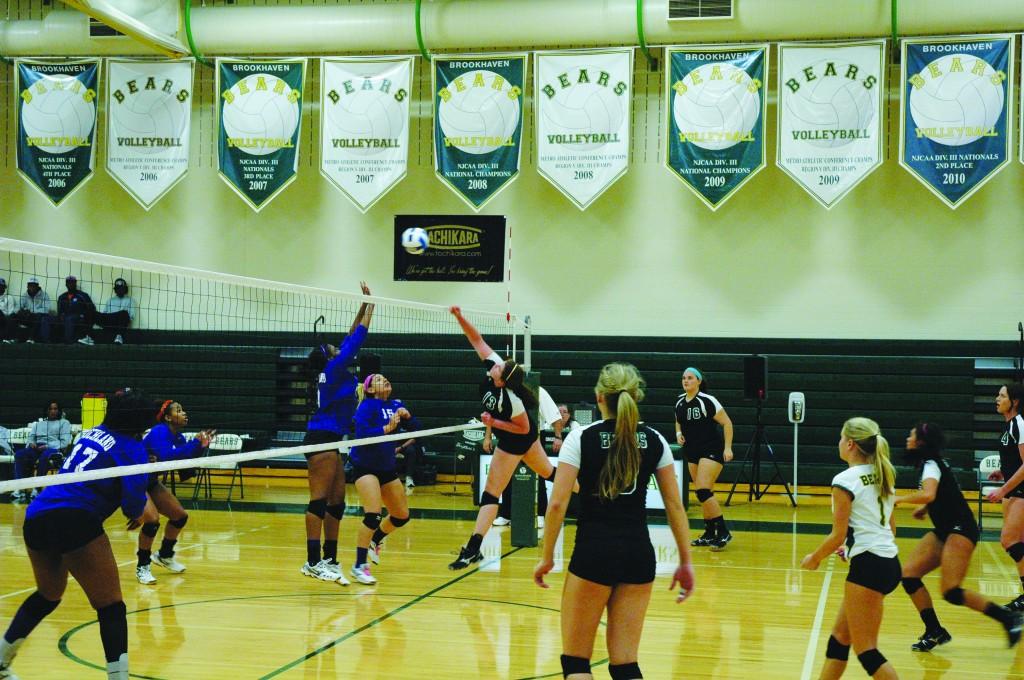 Brookhaven College’s Lady Bears volleyball team defeated Eastfield College Oct. 27 in round two, claiming victory in the the Metro Athletic Conference Tournament.
The Lady Bears dominated on offense and defense as the team swept the tournament’s opening set Friday, Oct. 26. The win sent the Lady Bears on to defeat Eastfield in the tournament finals, and the team will go to the NJCAA Division III National Championship tournament in Rochester, Minn., Nov. 9-10. The Lady Bears went to that tournament last year and came home with runner-up honors.
Head coach Jason Hopkins was particularly pleased with the more senior members of the Lady Bears team. Hopkins said, “Our sophomores really stepped up tonight.”
Sophomore Claire McStravick hopes to go to the national tournament to be recruited by one of the four-year schools that sends scouts to NJCAA tournaments. McStravick said, “Hopefully, nationals will give me exposure for a school for next year.”  When asked what she expects the other schools’ scouts to be looking for, McStravick said she hopes schools will be looking for someone who will lead on the court. “I’m really vocal when I play,” she said.
Player Ellie Harp, who also hopes to be scouted at the national tournament, said of the scouts, “They look for natural ability, but they also look for somebody who’d be a leader on the court, who can talk and keep the team together when they’re falling apart.”
McStravick and Harp credited much of the success of the Lady Bears volleyball team to the team’s spirit.
Harp said: “We have a really good group of girls.  We get along together on and off the court.”
The entire team, including the coach, volunteered to work at the North Texas Food Bank earlier this year. McStravick and Harp said many of the players hang out together in a number of different endeavors as well.
Harp reflected on last year’s trip to the national tournament in Rochester, Minn. Harp said, “Last year, Jason got appendicitis during our nationals game and so he had to stay in Minnesota for, like, weeks after we came back … He was at Mayo Clinic.”
The players are preparing for cold weather in Minnesota. Harp said, “I’m packing some warm clothing and a beanie.”