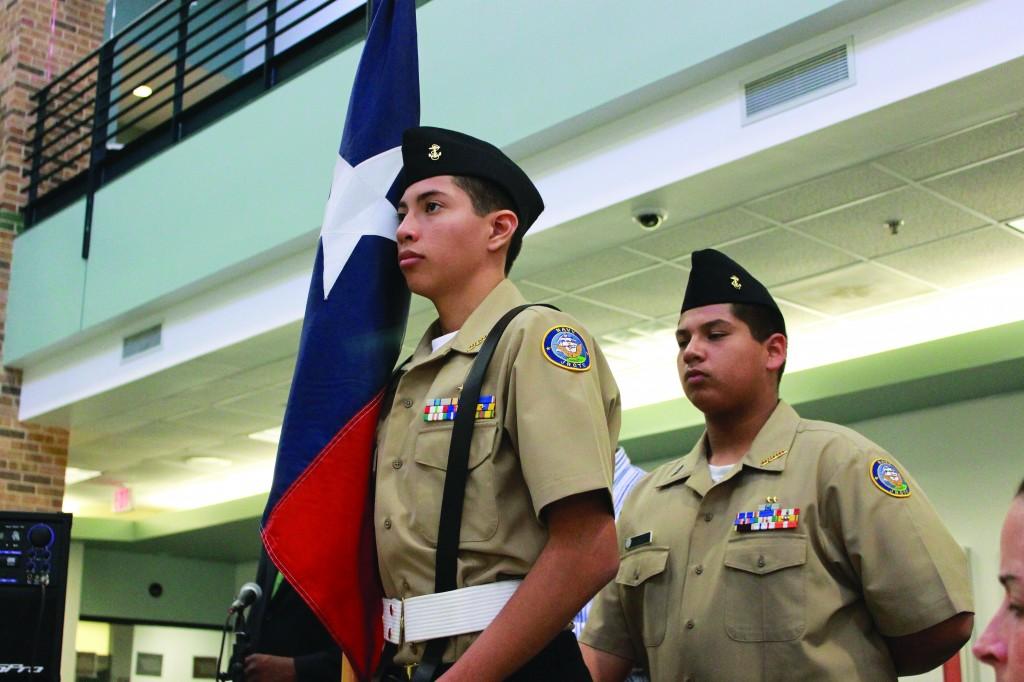 In observance of Veterans Day, a crowd gathered in the lobby of the S Building Nov. 8 to honor and show appreciation for loyal and dedicated service in the U.S. military and sacrifices made by Brookhaven College student, staff and faculty veterans. The Veterans Day celebration at Brookhaven was not limited to students, staff and faculty, but was also open to the public.
The ceremony opened with a flag presentation by students from R.L. Turner High School’s color guard. All in attendance stood while Kelly Hickman, senior rehabilitation specialist, sang the national anthem.
The celebration included thoughts from keynote speaker Lt. Col. Rick Kaiser, fourth-generation military assigned to the Army Corps of Engineers locally. Kaiser spoke about the many veterans of each of the military branches in the Dallas area and the role they play in supporting the community.
Offices throughout the Brookhaven campus began to show their support to veterans earlier in the week through bright visuals in a door-decorating contest. Student programs development specialist Dominica McCarthy organized the contest, and the show of support ranged from crepe paper and signs to what Ann Cortez, administrative assistant to radiology department, called “a showcase of our students,” in which photos of student veterans in service were proudly displayed.
The contest concluded with announcements of the door-decorating contest winners at the Veterans Day ceremony, with awards going to Radiologic Science for best overall, Outreach for most patriotic, Student Support Services for most creative design, and Workforce and Continuing Education for most heartfelt door design. The door-decorating contest had a lot of positive feedback and what McCarthy called “some competitiveness coming out.”
Among those in attendance was Don Ross, a fire inspector with the Farmers Branch Fire Department and Vietnam War veteran. Ross spoke of his experience when returning home from his service and the behavior of those who were in protest of the war.
When recalling an incident in which a fellow student at Bradley University spit on Ross, he remarked how different  the past was compared to present day. “They didn’t have any respect for the veterans,” Ross said. “In the last few years, people have learned the value of veterans.”
Brookhaven’s Veterans Day celebration is a example of the change in attitude toward veterans. After the ceremony was complete, Kaiser said, “The thing I was most impressed with was the veteran turnout today.”
Veterans Day is officially celebrated Nov. 11, but readers can show support for veterans of the U.S. Military any day of the year. For more information on how to get involved with Veteran Services, readers can contact the Student Veterans Organization at 972-860-4673 or stop by the Student Support Services office in room S124.